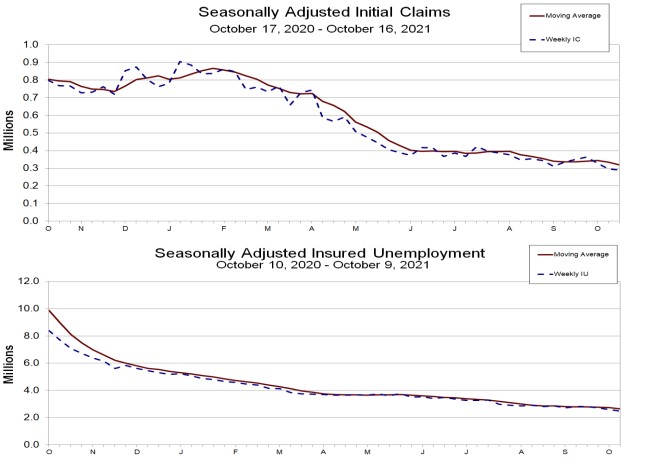 According to the Society for Human Resource Management, states reported that 281,000 workers filed for new unemployment benefits during the week ending Oct. 23, the lowest level during the pandemic era. New claims are down significantly from earlier this year and are closing in on their 2019 weekly average of just over 200,000.

The total number of workers continuing to claim unemployment benefits fell by 237,000 to 2.2 million, the lowest level since the COVID-19 pandemic began in 2020. By comparison, continuing claims had averaged 1.6 million throughout 2019.

The number of job openings in the U.S. has continued to outpace the number of unemployed workers and the overall trending decline in jobless claims is evidence that hiring difficulty has been the bigger drag on the labor market in recent months, rather than layoffs and separations. Job openings were at a near-record high of more than 10.4 million in August, while a record 4.3 million people quit their jobs that month.

States reported that 217,000 workers filed for new unemployment benefits during the week ending Oct. 29, a decrease of 1,000 from the previous week's revised.
View Post