He was born April 6, 1923 in Chicago, IL to immigrants from Germany. After the failure of his father’s garment business during the depression, the Tuerk family moved to Indianapolis in 1938. After graduating from high school in 1941 Robert entered the Navy Officer Candidate School and served in World War II. Following the war, he graduated from Indiana University in 1948 with a degree in history. 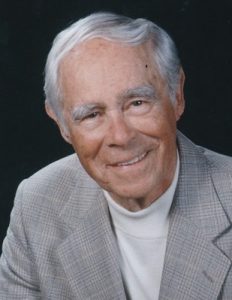 Immediately after leaving school Robert joined his brother and father in the family business, Aero Canvas Products. Robert took over the business in 1963 after the death of his father. The company grew with Robert’s gracious manner and creativity through the 1960s and 1970s. He revolutionized the truck tarping industry with his nine patents. Today’s trucking and tarp industry participants do not know the impact that Robert Tuerk had on tarp systems evolution. The first rubber coated tarp fabrics were introduced by Aero in the 1950s. The trucking industry started using Aero’s first roll tarp systems in 1965. In 1969, the “Aero Kit,” an aluminum extruded side kit, was Aero’s contribution to tarping systems on flatbeds. Other innovations followed for the next decade. Products introduced by Aero made trucking more flexible, efficient and safer. He created the industry that many tarp shops and tarping system companies enjoy today. Robert died during the 75th year of Aero Industries.

Robert was involved with the Industrial Fabrics Association International, the Indiana Motor Truck Association and the American Trucking Association. Robert was recognized with Indiana’s honorary, the Sagamore of the Wabash in 2004. Throughout those years he enjoyed volunteer work at Optimist International and many friends through Junto Club and Meridian Hills Country Club, where he played golf regularly with his 89, 95 and 98 year-old buddies. He also was a great dancer with a long line of ladies waiting. Along with golf, his interests were classic cars and an old stamp collecting. Robert and Jane wintered for 40 years in Boynton Beach, Florida.

Robert is survived by his wife of 65 years, Jane B. Tuerk and children David E. Powers, James R. Tuerk, Candace T. Hernandez all of Indianapolis area and grandchildren Caroline M. Tuerk of Los Angeles, Alexander D. Tuerk and Jonathan R. Tuerk, both of Indianapolis. Robert is preceded in death by his parents and siblings Paul R. Tuerk and Gloria T. Wray. He is a member of St. Luke’s Methodist Church.

There will be a calling at 4:00 p.m. Wednesday, January 30th at Leppert Mortuary Services in Nora, IN. The funeral will follow the next day at 10:00 a.m. Thursday, January 31st at Leppert.

In lieu of flowers, you may make a contribution to your favorite charity in Robert’s name.

Hires up in Professio