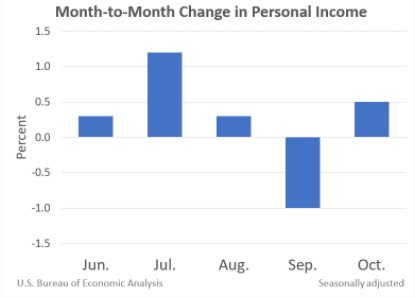 Updates to Personal Income and Outlays

Estimates have been updated for April through September. For April through June, estimates for compensation, personal taxes, and contributions for government social insurance reflect the incorporation of updated second-quarter wage and salary data from the Bureau of Labor Statistics Quarterly Census of Employment and Wages program. Revised and previously published changes from the preceding month for current-dollar personal income, and for current-dollar and chained (2012) dollar DPI and PCE, are provided below for August and September.

Economic activity in the manufacturing sector grew in December, with the overall economy achieving a 19th consecutive month of growth, say the nation’s supply executives in the latest Manufacturing ISM® Report.
View Post

The U.S. Census Bureau and the U.S. Bureau of Economic Analysis announced that the goods and services deficit was $80.2 billion in November, up $13.0.
View Post