Felling Trailers, Inc. announced that as part of its commitment to continuous improvement, the manufacturer has implemented a weld quality standard.

“The goal of the weld quality standard was to enhance Felling’s weld quality, weld efficiency, and to reflect the American Welding Society D1.1/D1.3,” the company said. Felling Trailers, Inc. Weld Standard was fully implemented February 4th, 2019 company-wide. The process had been in the works over the last year—from concept, development, approval, and roll-out. 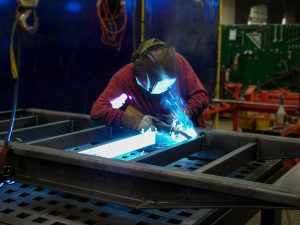 Felling states that the most significant portion of the production process of a trailer is welding, from piece parts like light boxes to ramps, to the trailer frame. Creating and implementing a weld quality standard was paramount.  To make this happen, Kyle Wald (VP of Engineering) and Ben Myhre (Weld Instructor) were identified as ideal candidates for the AWS Certified Welding Inspector Certification. In 2017, after receiving their certifications, the development of the program was built and approved by Felling’s management team. The final step was then educating every welder on the Felling Trailers’ team to the Felling Weld Standard. “The key element of weld quality is trained qualified individuals, training to the standard, inspection to the standard, and welding symbol refreshers,” Felling stated. 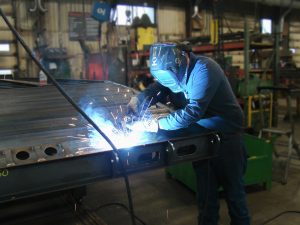 Weld Instructor Ben Myhre notes that “the Weld Quality Standard gives Felling Trailers Team Members a better understanding of the quality we build into each one of our trailers. Team Members received training that directly relates to their daily job tasks making it easier for them to identify possible non-conformities before the product reaches the next step of production.”

Once training was completed, there was a three-month implementation period where team members refined and clarified the standard.