Leading the broad-based employment gains were professional and business services and private education and health services, both of which added more than half a million jobs over the year. Leisure and hospitality, construction, and manufacturing also experienced employment growth. A notable change occurred in the retail trade industry, whose employment dropped by 88,000 in 2017 but was essentially unchanged (on net) in 2018. Overall, most of the major component industries added at least as many jobs in 2018 as in 2017. 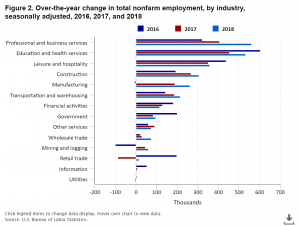 Year-over-year growth in real gross domestic product accelerated to 2.9 percent in 2018, compared with 2.2 percent in 2017 and 1.6 percent in 2016. Real personal consumption expenditures ticked up by 0.1 percent, to 2.6 percent, indicating some gradual pickup in inflationary pressures. The Industrial Production Index increased to 4.1 percent in 2018, following strong growth of 2.9 percent in 2017. These increases coincided with employment strength in durable goods manufacturing in both years, with the industry adding 215,000 jobs in 2018 and 125,000 jobs in 2017. In 2016, the Industrial Production Index increased by only 0.5 percent, and during the same year, employment in durable goods manufacturing declined by 56,000.

Since May 2014, the recovery point of the most recent recession, nonfarm payroll employment has expanded for 56 consecutive months, adding over 11.7 million jobs. By comparison, the longest employment expansion began in February 1993, lasted nearly twice as long (96 months), and added almost twice as many jobs (22.7 million).

Average weekly hours for all employees on private payrolls remained flat in 2018, staying within the range of 34.4–34.5 hours the entire year. Average hourly earnings, however, advanced by $0.89, to $27.53, for all employees on total private payrolls, a gain of 3.3 percent. Not surprisingly, given the unchanged workweek and increasing earnings, average weekly earnings also increased by 3.3 percent over the year.

In 2018, average weekly hours for production and supervisory employees trended similarly to those for all employees, staying within the range of 33.6–33.8 hours. The series began the year at a level of 33.6 hours and, over the next 11 months, ranged from 33.7 to 33.8 hours. Average hourly earnings for production and nonsupervisory employees on total private payrolls increased by $0.78 over the year, to $23.09, a gain of 3.5 percent.

Prices, as measured by the Consumer Price Index for all Urban Consumers (CPI-U), rose 1.9 percent over the year, resulting in 1.4-percent growth in real average weekly earnings. The growth in real average weekly earnings accelerated in the last quarter of 2018, averaging 1.1 percent over the year, compared with 0.7 percent in the preceding 9 months. This is due mainly to steady increases in average hourly earnings and some weakness in prices measured by the CPI-U.

After adding 190,000 jobs in 2017, manufacturing saw its employment growth accelerate in 2018, adding another 264,000 jobs over the year. Employment growth continued to be concentrated in durable goods manufacturing. In 2018, 81 percent of all manufacturing jobs were added in the durable goods component, compared with 66 percent in 2017. The component industries that drove gains in 2017 continued to show strength in 2018. These industries include transportation equipment (+65,000), machinery (+42,000), and fabricated metal products (+40,000).

Employment growth in manufacturing continued in 2018 despite rising trade tensions between the United States and many of its largest trading partners. Trade restrictions and negotiations disproportionately affect manufacturing industries because tariffs are levied on physical goods, not on services. Adding to the whirlwind of trade tensions, the United States–Mexico–Canada Agreement (the new trade agreement designed to replace the 1994 North American Free Trade Agreement) was signed on November 30, 2018, and is waiting for ratification by the three countries. The agreement’s new regulations may have far-reaching impacts on the transportation equipment industry and the supply chains that support it.

Employment in transportation and warehousing also accelerated in 2018, adding 216,000 jobs over the year, compared with 186,000 jobs in 2017. This acceleration was driven by couriers and messengers (+54,000) and by warehousing and storage (+84,000). Almost 2 out of every 3 jobs created within transportation and warehousing in 2018 can be attributed to these two industries. The rise of e-commerce has increased the demand for package handling and delivery services (couriers and messengers) and for storing goods and fulfilling online orders (warehousing and storage).