The Federal Reserve Bank’s June 2019 Survey of Consumer Expectations (SCE) shows an increase in short- and medium- term inflation expectations. However, respondents were generally more upbeat about their financial situation overall and about the labor market, with expectations about the U.S. unemployment rate, finding a job, and losing one’s job all improving.

The SCE is a nationally representative, internet-based survey of a rotating panel of approximately 1,300 household heads. Respondents participate in the panel for up to 12 months, with a roughly equal number rotating in and out of the panel each month. The survey contains information about how consumers expect overall inflation and prices for food, gas, housing and education to behave. It also provides insight into Americans’ views about job prospects and earnings growth and their expectations about future spending and access to credit.

Other finding from the survey: 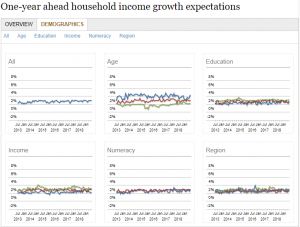