The number of job openings was little changed at 7.4 million on the last business day of April, the U.S. Bureau of Labor Statistics reported today. Over the 12 months ending in April, hires totaled 69.6 million and separations totaled 66.8 million, yielding a net employment gain of 2.8 million. (These totals include workers who may have been hired and separated more than once during the year.) 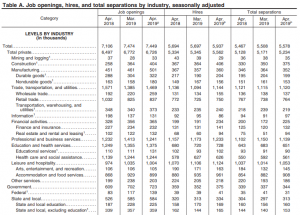 The “other separations” level was little changed for total private and for government. Other separations increased in accommodation and food services (+14,000).