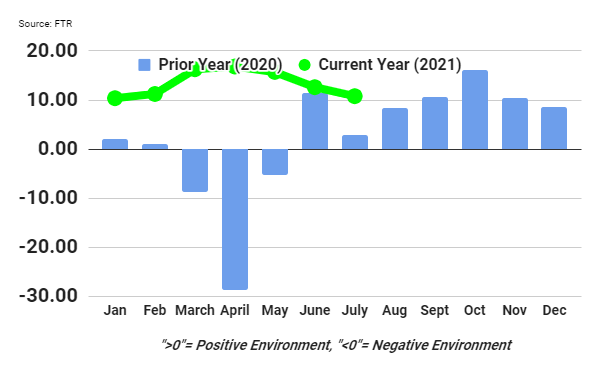 FTR’s Trucking Conditions Index (TCI) for July declined to 10.78 from 12.61 in June. Market conditions are still robust for carriers despite some modest easing over the past three months from the record TCI posted in April. In July, a softer rate and utilization environment along with a slightly higher cost of capital was offset somewhat by a stronger freight demand. The outlook for carriers remains strong with double-digit positive readings forecast through 2021.

Details of the July TCI are found in the September 2021 issue of FTR’s Trucking Update, published Aug. 31. Also included in the September issue is detailed discussion regarding the U.S. labor market and how changes could affect the driver situation as well as consumer spending. Beyond the TCI and additional commentary, the Trucking Update includes data and analysis on load volumes, the capacity environment, rates, and the economy. FTR also publishes ongoing publicly available analysis on the impact of COVID-19 on freight transportation at www.ftrintel.com/coronavirus.

Avery Vise, FTR’s vice president of trucking, commented, “We have yet to see any softening of market conditions that are basically the strongest trucking companies have ever seen – certainly for such a prolonged period. However, we are finally seeing some movement toward more driver capacity. The recovery in trucking’s payroll employment has accelerated over the past three months even as the number of newly authorized carriers – most of which would not be captured by payroll job data – continues to set records. Meanwhile, the number of pre-employment queries in the drug and alcohol clearinghouse in August was the highest recorded since the clearinghouse began in January last year. These developments have not shown up in any weakening of trucking conditions, but they certainly increase the chances for some stabilization in the coming months.”

FTR’s Trucking Conditions Index (TCI) for April rebounded to a reading of 3.21 from March when the index fell to -7.38. However, the April reading.
View Post

FTR has opened registration for their 18th Annual Transportation Conference being held Sept. 13-16 at the Crowne Plaza at the Union Station in Indianapolis, IN..
View Post