In the time frame just a bit short of a year, Felling Trailers, Inc. has moved buildings, built buildings, acquired new technologies, and moved existing equipment to streamline the production process and increase manufacturing efficiencies. All of this has transpired with the result of a state-of-the-art Fabrication Center.

In the fall of 2016 Felling Trailers worked with Thein Moving Co. Structural Movers to relocate existing Building 51 to make way for an expansion of the Main Warehouse to incorporate space for a new Fabrication Center. Over the 40 plus years of Felling Trailers’ existence, equipment and manufacturing space have been added as the company grew to meet demands of the market. The addition of the Fabrication Center is step-one of many in Felling Trailers’ goal to streamline the production flow from parts to production to finishing. Construction of the new Fabrication Center started in early 2017, providing 15,000 sq. ft. (29,000 sq. Ft. with Main Warehouse,) of space for new and existing technologies.  With the two buildings connected it allows for an efficient flow of production parts from the fabrication area, to the warehouse, to the production floor.

New Technologies
The first new technology to call Felling’s Fabrication Center home was the Mitsubishi 6000 Watt Fiber Laser with a tower automation set-up to run the cell. The Mitsubishi Fiber Laser operates on shop air (shop air is run through a 4-stage filtration system, then compressed to 225 psi), to cut material up to ¼” thick. For thicker materials the laser operates on oxygen. Equipped with tower automation, Felling Trailers can have up to 8 shelves loaded with up to 6,000 lbs. of material that can be pulled by the job. Knowing exactly what the tower can hold also allows for added efficiencies when ordering materials. The sheet steel for the laser is ordered in pre-bundled stacks to match the capacity of the tower, eliminating room for error in the loading process.

The second new technology to be placed in the Fabrication Center was the Safan 110-ton Electric Press Brake with an 8’ bed. The bulk of the parts that are fabricated will utilize the Safan’s 8’ bed. The Safan E-Brake ‘s ability to work 4-5 times faster than Felling’s other press brakes will, in turn, increase the throughput of parts for the production floor.  Another feature of the Safan E-brake is that it only draws power when in use, saving on annual power usage.

The Fabrication Center now houses all three (3) of Felling Trailers’ press brakes. The Accupress Edge 250 ton press brake and Cincinnati CB-II 350 ton press brake were moved from the front production bays in mid-June with the help of Quick-Way Rigging of Minneapolis, MN.  This fall Felling Trailers’ Marvel 2150 Vertical Band Saw and Hyd-Mech S23A horizontal band saw were moved into their places in the Fabrication Center.

The layout design of the Fabrication Center was based on the equipment used to complete the processing of fabricated parts. The key goals for the Fab Center were to: reduce non-value time inefficiencies, reduce the number of times material was being handled, increase safety and work environment comfort. The location of equipment was based on process flow. For example, the laser processes 30,000 jobs. Twenty-eight thousand of those jobs move on to the press brake, and from the press brake, the finished parts are placed on a conveyor cart where they are transported to a custom conveyor system to the warehouse side of the building. Once on the warehouse side, a sensor triggers a strobe light notifying the Material Handler to pick-up the finished parts. “It’s really about machine relation. The shorter the distance a part has to be moved during the process equals less time and movement that is required of the worker to complete the job. Flow is everything. A lot of the material handling solutions and concepts have been custom designed and made by our internal people. We are very lucky to have such a talented staff of custom fabricators,” said Chris Berg, Felling Trailers’ Project Manager.

These crane systems are a safe, worker-friendly solution for handling the large-scale material that we need to [handle],” said Berg. A two-bridge crane system is used to feed the press brake for larger production part jobs, which reduces the chance of a lifting injury. The second crane feeds the laser parts sorting area reducing the amount of forklift traffic. The third crane system resides over the new saw conveyor system. This placement allows the saw operator to handle the longer, heavier parts while the saw is still producing parts. Worker comfort was also factored in regarding airflow and environment temperature. This was achieved by a combination of two 18’ in diameter, SkyBlade HVLS (high volume low speed) fans and Reznor heaters for recovery when overhead doors are opened/closed. In warmer months, the fans can operate at a higher speed to move more air to create a cooling sensation and create a perceived temperature drop of up to 15 degrees. In colder months, the fans run at a lower speed to gently push heat generated by the heating units and equipment trapped at ceiling level back down to worker level with a draft. 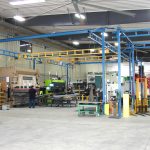 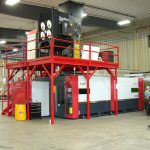 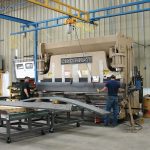 Felling Trailers is a family owned and operated Full Line Trailer Manufacturer located in Central Minnesota. Started in 1974 by Merle J. and Kathy Felling, Felling’s daughters Brenda Jennissen and Bonnie Radjenovich now own and operate the company with their spouses Patrick Jennissen and Paul Radjenovich. Felling Trailers, Inc. has grown from a small shop to a factory and office complex that today covers over 260,000 square feet. Felling Trailers currently manufactures over 5,000 trailers a year ranging from a 3,000 lb utility trailer to a 120,000 lb hydraulic gooseneck trailer, and its standard trailer line includes over 240 models. Felling’s pride and differentiation is its customized trailer division. Its engineers utilize the latest Industry-leading design techniques, and its experienced metal craftsmen use cutting-edge technology to turn its customers’ conceptual trailer needs into a tangible product. Felling Trailers continually researches and implements new technologies to reduce lead-time and increase production in the manufacturing plant. Felling has been providing innovative trailer solutions to the transportation industry for over 40 years.  With over 100 years combined industry sales experience, we have the answers to your specialized trailer needs. Felling Trailers’ current capabilities allow them to provide a high-quality product that is distributed across North America and internationally.  Felling Trailers, Inc. is an ISO 9001:2015 Certified Company.

Hires up in Professio