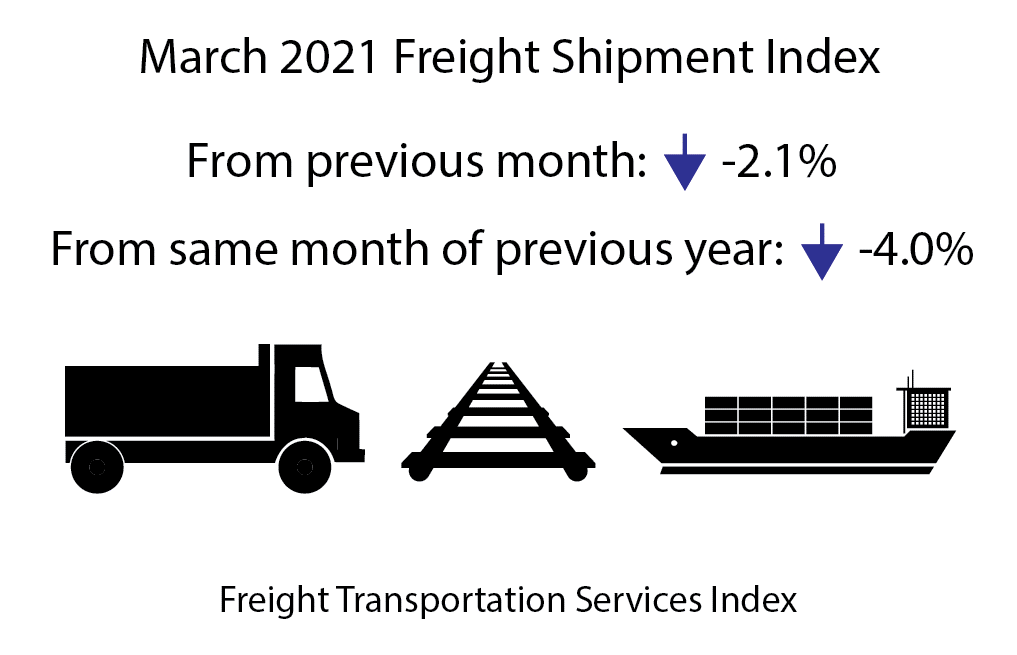 The March decline of 2.1% coupled with a larger 3.1% decline in February left the index down 5.1% since January and at the lowest level since June 2020. The February and March monthly declines were the two largest since the onset of the pandemic in April 2020. 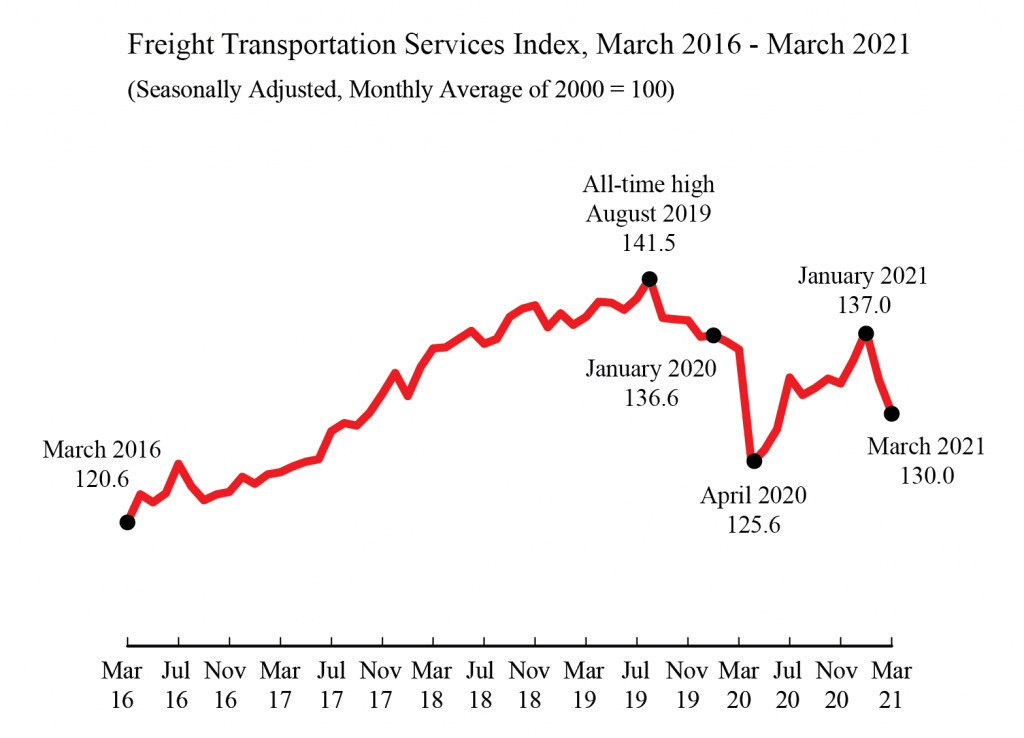 The Freight TSI measures the month-to-month changes in for-hire freight shipments by mode of transportation in tons and ton-miles, which are combined into one index. The index measures the output of the for-hire freight transportation industry and consists of data from for-hire trucking, rail, inland waterways, pipelines and air freight. The TSI is seasonally-adjusted to remove regular seasonal variation from month-to-month comparisons.

Analysis: The Freight TSI decreased 2.1% in March from February due to seasonally-adjusted decreases in truck tonnage and pipeline despite growth in water, rail carloads, rail intermodal, and air freight. The large decline in truck freight volumes, possibly due to supply chain issues, outweighed gains in other modes. The March decrease took place against the background of growth in other indicators from February to March.

The Federal Reserve Board Industrial Production (IP) Index grew 1.4% in March, reflecting increases of 2.7% in manufacturing and 5.3% in mining, while utilities decreased 11.4%. Housing starts were up 19.4%. Personal Income increased by 21.1% (the Bureau of Economic Analysis notes that Personal Income in March was impacted by the continued government response to COVID-19). The Institute for Supply Management Manufacturing (ISM) index was up 3.9 points to 64.7, indicating growing strength in manufacturing.

The fourth-quarter TSI decrease of 3.3% came in the context of continued quarterly GDP growth.

Although the March Passenger TSI is being withheld because of the difficulty of estimating airline passenger travel and other components, the February index is now being released. The index increased 9.2% from January to February following an increase of 9.3% in January. Air passenger, and rail passenger grew, while transit was down. The Passenger TSI remains above the levels of March 2020 through January 2021 though it has not returned to its level in February 2020, the last month before the impact of the pandemic. It remained below any level the Passenger TSI had been before the pandemic for the 12th consecutive month.

Trend: The March decline was the second consecutive decline for a cumulative decline of 5.1% since January. It was the second largest monthly decrease since April 2020. The freight TSI is now below its level of July 2020. The index is 8.1% below its record level of 141.5 in August 2019 and has decreased in 11 of the last 19 months since that peak. For additional historical data, go to TSI data.

Year-to-date: For-hire freight shipments measured by the index were down 3.3% in March compared to the end of 2020 (Table 3).

The TSI has three seasonally adjusted indexes that measure changes from the monthly average of the base year of 2000. The three indexes are freight shipments, passenger travel and a combined measure that merges the freight and passenger indexes. See Seasonally-Adjusted Transportation Data for numbers for individual modes. TSI includes data from 2000 to the present. Release of the April 2021 index is scheduled for June 9.

Revisions: Monthly data has changed from previous releases due to the use of concurrent seasonal analysis, which results in seasonal analysis factors changing as each month’s data are added.

BTS research has shown a clear relationship between economic cycles and the Freight and Passenger Transportation Services Indexes. See a study of this relationship using smoothed and detrended TSI data. Researchers who wish to compare TSI over time with other economic indicators, can use the FRED database, which includes freight, passenger and combined TSI, and which makes it possible to easily graph TSI alongside the other series in that database. See TSI data on FRED.

A BTS report explaining the TSI, Transportation Services Index and the Economy, is available for download.

Prices for U.S. imports increased 1.1% in May, after a 0.8% advance the previous month, the U.S. Bureau of Labor Statistics reported today. Higher prices.
View Post